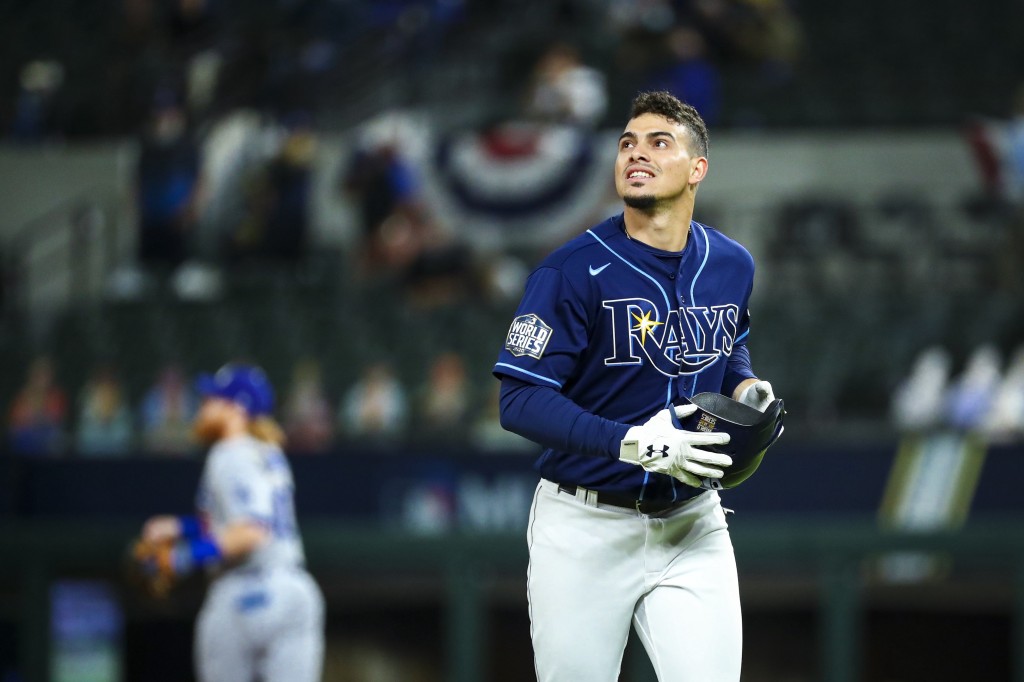 Willy Adames played over parts of just four seasons for the Tampa Bay Rays, but it it felt like a lifetime. (Will Vragovic/Tampa Bay Rays)

A stunned silence came over the Tampa Bay Rays dugout at TD Ballpark in Dunedin, Florida.

The Rays, getting ready for a four-game tilt against the Toronto Blue Jays, were in the midst of warming up before Friday’s series opener when news broke about shortstop Willy Adames.

Adames, the vocal centerpiece of this team, the king of vibes and in many ways, the heart and soul of the Rays, was traded to the Milwaukee Brewers along with right-handed relief pitcher Trevor Richards.

In return, Tampa Bay received pitchers Drew Rasmussen and J.P. Feyereisen, but this wasn’t about what the Rays got back, it was more about who they got rid of.

The Detroit Tigers first signed Willy Adames as an international free agent in July 2012, and Rays fans will know Adames as the main prospect to come to Tampa Bay in the David Price trade on July 31, 2014.

He would work his way up through the minors over the next four seasons, holding the title of the Rays top prospect from 2015-17, soaring up the top prospect list to as high as #16.

Adames made his MLB debut on May 22, recording his first MLB hit in the same game, a solo home run off Boston Red Sox starting pitcher Chris Sale.

He quickly became a fan favorite, holding down the fort at shortstop, making some incredible plays and being the center of some memorable moments in Rays history.

He had three walk-offs in his Rays career, but what he’ll be known most for is ‘The Relay’. If you’re a Rays fan, you know exactly what that phrase means.

Yordan Alvarez lines a double that one-hops off the center field wall. Center fielder Kevin Kiermaier plays it off the bounce, relays it on a line to Adames in short center, and he throws a laser home to catcher Travis d’Arnaud to tag out Jose Altuve.

If you think Derek Jeter’s relay was good, this one might have topped it.

Adames was an excellent defender, making some insane plays, especially in the 2020 ALCS against those same Astros.

Now, his glove, his bat, and his energy, are gone, but don’t fret Rays fans. While Adames might be gone, reinforcements have come via the No. 1 farm system in MLB.

Walls has been a highly-touted prospect in Tampa Bay’s system for some years now, an excellent defender with some pop. He’s soared up the ranks of the Rays’ minor leagues after an impressive three-year career at Florida State.

The Rays selected Walls in the third round of the 2017 MLB Draft, and would’ve probably made the MLB roster had there been a full 2020 season.

He had made it up to Double-A Montgomery in 2019 and would’ve been in Triple-A Durham before the end of the season, so a September call-up was possible.

Instead, he played at the alternate site during the shortened season and now, after raking in Durham to start the 2021 minor league season, Walls is here and Rays fans are rejoicing.

With an organization like the Tampa Bay Rays, as much as it’s tough to watch a player like Willy Adames leave, it’s just par for the course as he’s not the first big name to be traded.

Heck, he came over as part of the David Price trade, so clearly, anyone is up on the trade block. However, while he is no longer on the Rays, Willy’s presence and his impact won’t be forgotten.

With the trade to Milwaukee, a team that doesn’t have a steady shortstop, Adames hopefully will be their franchise shortstop of the future and he’ll flourish there.

He’s sure to be a fan favorite, but for now, we wanted to say, thank you for everything you did in Tampa Bay, Willy. We’ll miss you and we wish you all the best in Milwaukee. Don’t be afraid to come back and say hi either.