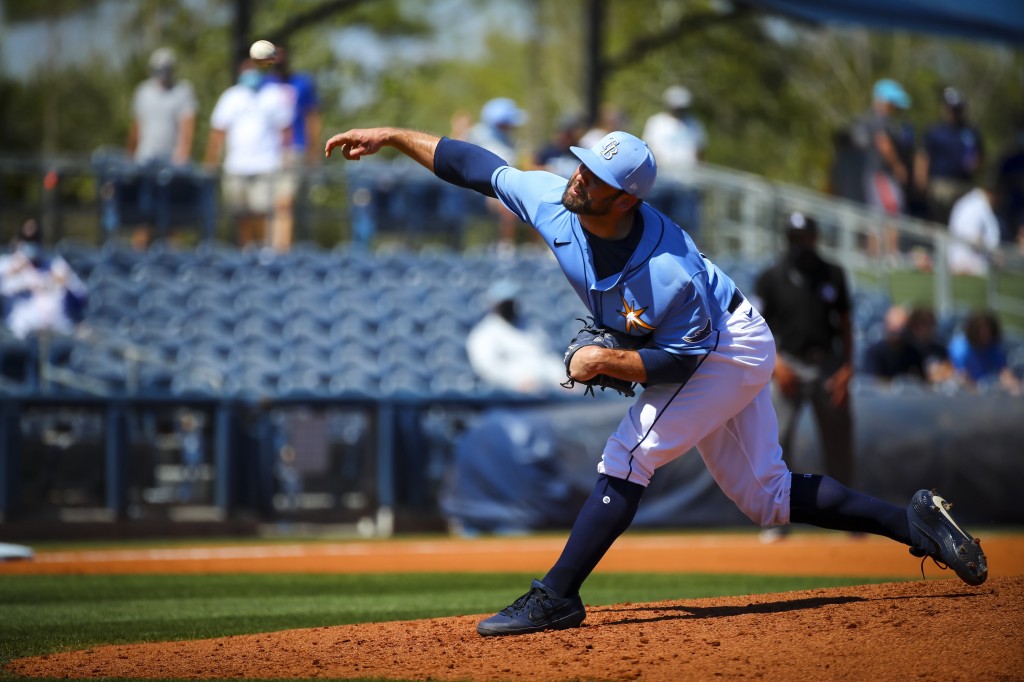 Andrew Kittredge (right) will be a interesting watch to start this 2021 season. (Will Vragovic/Tampa Bay Rays)

Most people know that Andrew Kittredge was an important part of the 2019 season for the Rays, but do they remember just how important? And now, with his returning from a significant injury and having missed much of 2020, what exactly should we expect from Kittredge in 2021?

Kittredge broke into MLB in 2017 and immediately showed some promise. There were some growing pains in 2018, but it was in 2019 that we saw the best out of Kittredge. We can only assume that he wasn’t 100% in 2020 now that we know he succumbed to injury, and so it makes looking back at his stats throughout an interesting proposition.

Here’s a basic rundown of his stats with the Rays:

As you can see above, he’s been steadily able to induce high GB% throughout, has generally done a great job minimizing HardHit%, and kept BB to a minimum from 2019 onwards. Speaking of his 2019 season though, maybe the list above doesn’t do it justice. Here’s how Baseball Savant saw it:

As you can see, there wasn’t a weak point in his performance, and he was one of the more valuable pen arms for the Rays as they made their first of consecutive playoff appearances.

Considering his 2019 performance, and what value that would have on the FA market (Soria signed with the DBacks for $3.5M), it’s not surprising the Rays are bringing him back into the fold.

What kind of stuff has Kittredge used to manage some success in MLB? (displaying 2019 edition from Baseball Savant since my inclination is that they’ll hope he returns to that form in 2021)

As you can tell from the arsenal noted above, Kittredge generally likes to work low in the zone and generally ventures North only with the 4-seamer.

That likely became problematic in his limited 2020 time since he mostly dropped the 4-seam (only noted as using it 3 times), becoming mostly a sinker/slider reliever. The result was a whopping .421 xBA against his Slider and Whiff rate that dropped to just 20% despite an even higher spin rate of 2824.

In short, look for a more varied list of offerings from Kittredge in 2021.

Instead of undergoing TJ surgery, like so many Rays pitchers did in 2020, Kittredge decided to rehab his injury. There are differing levels of success when it comes to rehabbing sprained ulnar collateral ligaments, but there’s been more encouraging success stories lately. And that includes Kittredge, as noted by Neil Solondz:

“It included a shot, similar to a PRP injection, as well as rest and rehab. It turned out to be the best move.”

The treatment options have advanced significantly, and it seemed to do the trick just fine for Kittredge who has drawn rave reviews from hitters who’ve gotten in the box against him. Please, don’t look at his Spring Training stats (7.04 ERA and 1.57 Whip) and jump to conclusions. Instead, listen to what others are saying about his stuff. As Rays catcher Kevan Smith said:

“I told him Sunday when we were catching, whenever you get two hitters after a pitch to say that’s nasty, that’s one of the best compliments I think you can get,” said Smith. “That was encouraging for Kitt and just encouraging for him to be able to work through that inning, fill up the zone, and just deal with a little adversity there.”

Still don’t believe them? How about from Kevin Cash?

“He worked really hard to get himself back in shape, the arm healthy, and we’ve seen that,” Cash said. “The velocity and the break to the slider, the sharpness of it, has been outstanding.”

If anything, look at Spring Training in this case as an extended workout to sharpen the edges on his stuff. Still, it begs many questions. When will we see Kittredge back in The Show? How well could he perform? And how will he be used?

Nobody can really say when he’ll reach the majors. You would think that a start in AAA to continue building up strength and control over his stuff would make sense. But the minors season is starting later, and even if that may actually be a blessing for Kittredge, there’s a fair chance that their comfort with his performances and abilities pushes the timeline up.

For how well he’ll perform, that’s also tough to say initially. What I’d say is that if and when the Rays do call his number, it’ll be because he’s ready to assume a steady role in the Rays pen. That doesn’t mean that once he’s up he’ll stay up. He does have an option remaining, and it will be used to both limit his IP in ’21 and to ensure the pen continuously has fresh arms to draw from.

The timing of the Nick Anderson injury and Andrew Kittredge’s addition to the 40-man roster are a fine example of the importance of depth and patience. Hopefully it works out well for all sides.

Recommended reading: this article from Neil Solondz about Kittredge